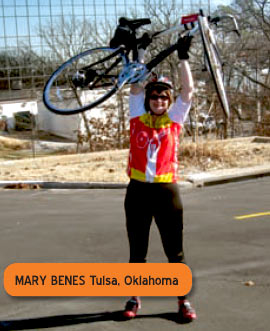 MARY BENES was diagnosed with multiple sclerosis in December 2003. She is an Oklahoman who credits cycling with helping her battle the debilitating effects of MS, and with giving her strength and freedom after her diagnosis.

When did you start cycling?
I have loved cycling ever since I was a child because it provided me with a feeling of freedom, but I dabbled in it. However, after my MS diagnosis in December 2003—what a Christmas that was—maintaining a sense of freedom took on a whole new meaning for me. My journey from wishing I could cycle again to actually being able to cycle again was a challenging one.

When I was diagnosed, I went into a disease-modifying therapy for MS and, unfortunately, entered into a super-careful cocoon where I tried not to do anything that might “aggravate” my MS. As the fall of 2006 rolled around, my severe fatigue seemed to dissipate, my MS was stable and I made a decision to try and start cycling again seriously. My goal was the 2007 Oklahoma Bike MS ride, which was 70 miles.

What inspired you to start?
I wanted to reclaim my freedom. Prior to being diagnosed with MS, I was hard pressed to ride even 30 minutes and my bike gathered dust. Once I found out I could still ride, the decision was made to begin training in the earnest for the National MS Society’s bike ride as it was very popular in my area and it seemed to make sense, since I had MS. I purchased my first road bike and began doing rides with the Tulsa Bicycle Club to get ready.

What is a day in your bicycling life like?
Though initially getting back into cycling shape was an uphill battle, now I just have my breakfast, slip into my cycling clothes and head outdoors—either in my neighborhood or with friends on the open road. After what is now a nice ride, I come home and savor what I accomplished.

Do you recommend cycling to others? Have any taken you up on it?
I do! One of my friends is already planning to join my team for the Oklahoma Chapter’s 2008 Bike MS ride. And in 2008, I hope to undertake some destination vacation cycling, because the

Society offers more than 100 Bike MS rides across the country from March to November.

What kind of bike are you currently riding?
I currently have a carbon-fiber road bike, which I bought as my reward to myself for all the hard work I did in training.

What's the best part about cycling?
Where to begin? The friends I make, the support everyone gives me. And don’t forget the wonderful people I meet who work the Bike MS ride rest stops and keep us all well fed. One of my favorite stories is about a man who sponsored me in this year’s bike ride. He had heard my story at one of the training rides and actually rode with me for a time that day. He wrote online that he was inspired by me and wanted to sponsor me. He made me feel like I’d been given MS for a reason and it wasn’t so bad.

I’m particularly fond of my Oklahoma chapter as they have been so encouraging and supportive of me and I would invite anyone who likes to cycle to come to Oklahoma and cycle with me and my team to help create a world free of MS.

Cycling has also seemed to help me in walking and I feel my walking had improved since I began cycling. It is so important to stay healthy and fit when dealing with a chronic illness. Even though I’m an Oklahoman, bike riding has become a great way to see parts of my state that I wouldn’t normally get to experience.

What's the worst?
The hills, definitely the hills!