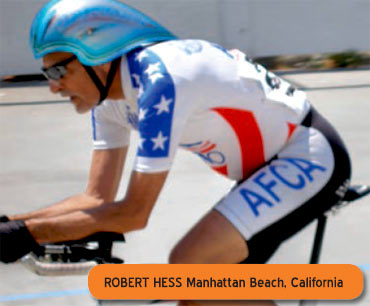 ROBERT HESS is the founder and principle of a business consulting firm and works at the University of Southern California. He is 63 years old and lives in Manhattan Beach, California. Cycling helped him overcome prostate cancer, and helps prevent a recurrence.

When did you start cycling?
My younger sister and my brother-in-law got me involved in cycling in 1988. I started in mountain biking and then got interested in road cycling. At the time I was still in the Army and working at the Pentagon. My sister lived in the Shenandoah Valley, so I would drive down on the weekends and ride the fire roads in the national forest and along Skyline Drive and portions of the Blue Ridge Parkway. I also did a lot of rides around the Pentagon in Virginia and D.C.

What inspired you to start?
I enjoy the competitive aspect of the sport, but it is the social component that is the most engaging and long lasting. After battling prostate cancer, I know that the only things I can do to help prevent a recurrence is work on my nutrition, exercise, and mental attitude. Bicycling is a fundamental factor in my prevention program.

What is a day in your bicycling life like?
I began track cycling about eight months after my prostate cancer surgery and found that I was fairly good at it—in age-graded categories, of course. In 2007, I won the gold (California State Champion) in the 200-meter sprint and the silver in the 500-meter and two-kilometer sprints.

Every week, I train at the velodrome; ride along the Pacific Ocean from Manhattan Beach to Playa del Rey on my time trial bike; spend some time on my stationary bike listening to audio books on my headphones; and do a road bike ride from Manhattan Beach to the top of the hills on the Palos Verdes Peninsula, about 20 miles south, with a friend.

Do you recommend cycling to others? Have any taken you up on it?
I encourage everyone I meet to get into cycling. While I enjoy the competitive aspect of cycling, I think recreational cycling is just as rewarding and more fun. Lately I've been encouraging my friends to try the velodrome: no traffic lights, no potholes, etc., and since the velodrome near me is enclosed, the weather is always perfect.

I love to promote cycling. I'm currently working on creating a series of Black Tie Affair events to raise awareness about prostate cancer and the need for early detection, and trying to raise interest from local high schools in creating cycling teams to compete at the velodrome.

Exercise has a way of improving our psychological outlook, which I believe is critical for cancer survivors, who always have that nagging "will it recur" thought sitting on their shoulder.

What kind of bike are you currently riding?
I have a road, time-trial, track and mountain bike. My wife, Melissa, says that if one more comesin, one must leave.

What's the best part about cycling?
For me it is the sense of freedom and accomplishment I always have regardless of the length of the ride. It's my time to just let my other thoughts melt away and watch the world go by.

What's the worst?
The ride coming to an end.