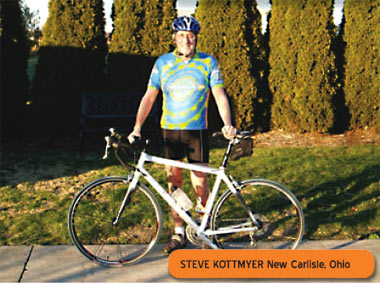 STEVE KOTTMYER is 56, and works as a Special Projects Team Leader in New Carlisle, Ohio. Being in great shape, through cycling, before his diagnosis with esophageal cancer proved key to his recovery. Continuing to cycle also helped him heal, physically and mentally.

When did you start cycling?
I started cycling more than 30 years ago. I started getting serious about road biking about six years ago, and bicycled 4,350 miles 2007.

What inspired you to start?
I’ve always liked to ride, and I got more serious about it to stay healthy. I had severe acid reflux for several years, but after taking a prescription acid reducing drug, I was symptom-free for several more years. In the early summer of 2005, I felt a ‘little something’ —not pain—in my chest. I was somewhat aware of the possibility of cancer caused by acid reflux, so I went to a gastroenterologist. I had an endoscopy and a biopsy of a tumor they found at the bottom of the esophagus. The tumor tested to be cancer, adenocarcenoma stage 1. By the time the biopsy results had come back, I had researched esophageal cancer and was aware of the statistics. The chances of surviving this kind of cancer are slim. This is a relatively rare (though becoming more common) and deadly form of cancer. We scheduled the surgery and then lots of pre-tests to make sure the surgery wouldn’t kill me. The surgery was done on July 25, 2005.

What part did cycling play in all this?
I had been road cycling for lots of years, really seriously for six to seven years. For a 54-year-old, I was in good physical shape before surgery. That in itself helped tremendously. I wouldn’t want to go into this already in poor shape. Exactly 30 days after surgery, on September 3, 2005, I took my first ride with my son-in-law—9 miles at 12 mph. Not far, not fast, but a start. I rode a total of 161 miles that month.

I progressed to longer, faster rides the rest of 2005. I rode 3,200 miles in 2006 and 4,350 miles in 2007. I feel that riding has helped me heal. It helps the circulation, breathing, but most of all, my mental outlook. It’s easy to get down sometimes, but I never finish a ride feeling badly.

What is a day in your bicycling life like?
First, I try to find someone to ride with me. I have several friends that ride, so that’s usually not a problem. (One of my best biking friends used to weigh 640 pounds and now weighs 190, after bariatric surgery and cycling. He’s now a biking animal.) Then we plan a route. If it’s not a workday, we’ll go 50 miles or so, and we make sure we pass by someplace to buy lunch. Then we just ride and enjoy.

Do you recommend cycling to others? Have any taken you up on it?
Yes, my sons and daughter ride. The guy I mentioned above and a couple more friends from work ride often. We’ve even started a Tuesday after-work ride that usually has 8-12 riders every week. We ride year round. We rode last night—and it was 32 degrees!

What kind of bike are you currently riding?
I ride a touring road bike for long rides and night rides. I ride a sport-road bike all other times.