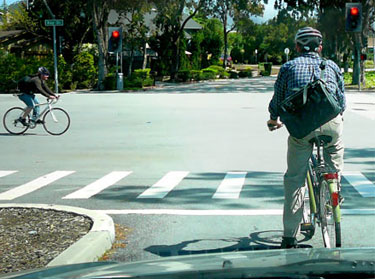 You're driving along and you spot a bicyclist ahead sharing the road. You're a biker too. So, just like the cars that you're watching, you keep an eye on the cyclist. But then, he does something unexpected—something that even seems dangerous to you.

But is it dangerous?

It turns out that even though two- and four-wheelers share the road, there are many differences in how they use it when it comes to safety.

First, keep in mind that while everyone gets frustrated with other road users, cyclists are unprotected by steel, airbags or other safety features. Even small collisions can have catastrophic results. So, use extra care around them. And if you feel the need to honk, a quick beep is loud enough since they're not inside a car. You wouldn't want to startle them causing a crash.

Now, let's hop behind the wheel and look at common cyclist encounters through the windshield to appreciate what's actually going on from a bicycling perspective.

Why is it... that the cyclist in front of me at the red light is positioned in the center of the lane (photo, top)?

Answer: This is actually a sign of a smart road-sharer who understands that the detector beneath the pavement that trips the light won't work unless he gets his bicycle (which has much less mass than a car) on top of it. Unfortunately, bike-friendly intersections with detectors on the shoulder, especially for cyclists are rare. Note: In most locations it's legal for cyclists to proceed through an intersection if the red light doesn't change as it may mean the detector isn't working (but only if it's safe). 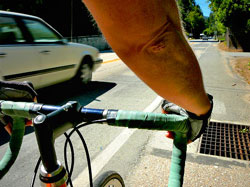 Why is it... that bicyclists ride near the traffic lane even though the shoulder is wide?

A: This is because they are more aware of, and more at risk from road hazards. They are riding on the side of the road where the pavement is worse and debris tends to collect.

When you're driving you can't see hazards the way cyclists can. Drivers sit back and look out. Cyclists sit up and look down watching for glass and potholes that can cause a flat tire, and sand and slippery metal grates that can cause a crash (photo). They also watch for parked cars and exiting drivers who may swing their door open at the worst possible moment.

All these are reasons why cyclists often hug the traffic lane for their own safety. And, it's why the law reads that cyclists ride as far to the right as is "practicable." As a driver, pay attention and trust that the cyclist is riding where he has to to be safe. Simply slow down and wait until you can pass safely with adequate clearance.

Why is it... that cyclists sometimes move into the center of the lane? If they’re supposed to ride as far to the right as is practicable, shouldn’t they stay on the shoulder?

A: When you see a rider do this (called "taking the lane"), it's their way of telling you that they need to use the whole lane to be safe and that you need to wait for them to move over before passing. You'll see this on narrow roads where a passing car would pinch and endanger a rider making the mistake of staying on the shoulder. And also on steep downhills where a bicycle can go as fast as a car. The high speed also means that the cyclist needs more maneuvering room than provided on the shoulder. Simply wait and they will move over when it's safe to.

Why is it... that cyclists ride side by side a lot? I thought it was better if they drafted in single file?

A: While it's true that drafting behind each other saves energy, that's something racers are more familiar with than everyday riders. And, just like when you're driving in a car with a friend, cyclists like to have company on rides and talk when riding. So, they'll ride side-by-side sometimes, which is okay as long as they aren't inhibiting the reasonable flow of traffic. Usually though, they'll only do this when there's room to ride that way and when the traffic is light. And they're also mindful of traffic and ready to ride single file when necessary. 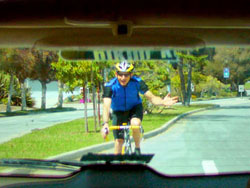 Why is it... that that cyclist got all upset back there?

A: There are a few common things that startle and endanger cyclists and can cause them to gesture or shout to try to let you know that you need to drive more attentively. One of the most common driving mistakes is turning across a cyclist's path unsafely. Never cut off an oncoming rider by turning left in front of them, or do it by turning right too soon after passing them (note that in many areas it is illegal to pass before an intersection when you are turning right).

Understand that since a bicycle is much smaller than a car, it's difficult to see them and judge how fast they're going. Don't assume that bikes are slow, either. They can easily travel as fast as cars. So, never turn in front of a cyclist unless you're certain it's safe. Otherwise the rider will be forced to slam on the brakes and it's much harder to stop quickly on two wheels. He may smash into the side of your car, get seriously injured and damage your vehicle, too.

Another dangerous move is passing a cyclist when you can't provide safe clearance. Bikers call this "getting buzzed." It's scary, dangerous and illegal. Your side-view mirror may barely miss them. If you're driving a truck, it's even worse. The noise and rush of air could cause the rider to lose control and crash, falling into the traffic lane. For these reasons, many places now require drivers to allow a minimum of 3 feet of clearance. But in all locations, the law requires passing safely. This means slowing and waiting until you can move over and pass safely providing ample clearance. 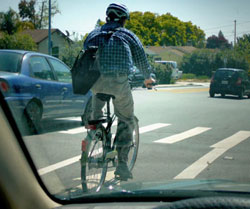 Why is it... that when I come up on a cyclist at an intersection, they get in the way?

A: What you perceive as them getting in the way is actually them trying to make sure you see them. They may be going straight and often right-turning cars will come up on the left and then move right, endangering them. Cyclists who’ve had this happen watch for it and get in the way. But, they will do their best to allow room if there is enough on the right. They just don’t want you to come up on the left and then turn right into them.

A: Actually, in many municipalities, it’s not a law that cyclists must signal because it can be dangerous for them to remove their hands from the handlebars. Instead, it’s considered enough that the cyclist lean in the direction of the turn, which is an indicator drivers can watch for. Some cyclists will use hand signals, but it’s not always mandatory. It's best to be patient and wait to see what they’re going to do whether they signal or not. 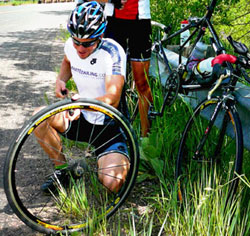 Why is it... that bicyclists fix their bikes right near the road where it’s dangerous? Why don’t they find a safe spot?

A: Usually this is because the most common bicycle breakdown is a flat tire. Unlike a car, you can’t safely ride on a bicycle with a flat tire. So, cyclists have to stop wherever they puncture to fix it. If it’s a narrow road with no shoulder, they will try to find the safest spot, but sometimes that’s still pretty close to the road. When you see them, slow down and allow a wide berth because they’re doing the best they can

Why is it... that that cyclist is riding on the sidewalk? Isn't that illegal?

A: In many areas it's actually legal to bicycle on sidewalks. Usually it's where the roads are busy, narrow or fast and it's safer to be on the sidewalk. You will also sometimes see kids riding on sidewalks because their parents told them to ride there since they don't want them in the road with cars. Some riders will also choose the sidewalk when the road doesn't seem safe to them. As a driver, it means watching for these cyclists, especially at intersections where they can enter from either direction and be obscured by parked cars. 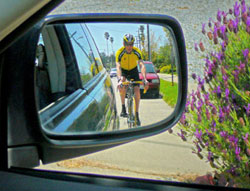 Why is it... that that cyclist I passed a ways back, just passed me and all the other cars waiting at the red light to get in front. Now I have to pass him again.

A: What might seem frustrating to you is actually a cyclist being careful, and moving toward the front for good reasons. He may be avoiding right-turners without their directionals on or not wanting to breathe exhaust fumes. Or, in a long line of traffic, he might have to move to the front in order not to miss the light. Note too, that if there's a dedicated bike lane, bikers are free to move to the front in it and you should not stop in it when cyclists are present.

Thanks for reading and please bike and drive safely.